A glimpse into a stylist’s 2 days at a hair show/convention:
If a person does not have an affiliation with the industry, he/she would not be allowed through the doors of our unique world to see the sights. Therefore, I will give you a peep ...

There is something so awesome about how things look opposite when one is in this group of people. For example, I was walking through the aisles of vendors and had to take a double take as my eyes saw 3 firemen in the blue pants and t-shirts. Their normalcy made THEM stand out in that crowd. I could not help but laugh and make the declaration to them, “Ummm, I hate to tell you, but you guys don’t really fit in with this crowd. How did you get in here? And WHY?”
They were all 3 aware that they were in another world and said they just wanted to see what was going on. Each had an unusual look about them as they slowly walked around, an occasional tilt of the head to say a quick word to the other, then everyone looked in the same direction.
The same type of response came from one of the convention center workers. The look on his face told me he had never seen a collection of people involved in my industry. Each time I spoke to a non-stylist person, they seemed happy to be addressed. Possibly, feeling out of place since "regular" and blending in was NOT regular or blending. In my opinion, it is a healthy dose of beautiful, unique, expressive people. Besides, who wants to be a carbon copy of everyone else anyway?! Different = better!

Back to the convention ... There were cocktail bars set up in various spots (on average, most stylists do enjoy cocktails) and I couldn’t help but acknowledge the bartenders’ clear states of awe.
I said, “This is quite a sight, isn’t it?”
The bartenders were African American, an older man and woman, and both replied in complete agreement. It was as though they had been holding back their shock until asked that question, and then they seemed relieved to have their thoughts validated. They went from being quiet and expressionless to smiling and talkative.
“Oh, it is! Yes, it sho is somethin else to see!”

Going to a hair show is similar to being in a city like or . It is a melting pot of everything, everyone, and anything goes. The sights are so stimulating that one could take a seat anywhere simply to sit and people watch as the scores of human forms of art pass by in a nonchalant stroll.
There are a few conservative people in the industry, but they are completely unfazed by the ones who are not. Hair shows allow the artistic people to express themselves in any way they choose AND people will simply talk to them without a gaping open mouth. Everyone is there to see new looks and concepts … and that’s what we do. Rainbow hair, tattoos, body piercings, glitter, feathers and lots of sparkles; it mixes together nicely.
The show is set up to occupy all people at all times. There are classes going on involving every part of the industry. Depending on what the artist wants to learn more about, he/she can choose the class. They may be focused on cutting with scissors, razor or clippers … or extensions, coloring, straightening, up-do styling, nails, skin care or product knowledge. There are also numerous booths set up selling products, equipment, clothing or services. So, in between classes, we can browse around and spend several hundred dollars on new irons, dryers, nail polish, make-up, capes, smocks, clothes, diamond inserts for the hair, strands of hair to add into a client’s hair, get our teeth whitened, detoxify our bodies, get a $7 drink, try a facial mask with collagen … the list goes on and on.
The vendors set their booths up in a way to create an individual atmosphere. They decorate the area, play music, do demonstrations, talk on microphones and have shock factor, intriguing people working in the area to catch the eyes of passer-byes. It works.
One of my favorite booths, Enzo Milano irons, had 3 unique people working in it. One girl had vibrant, totally pink hair and she was an AMAZING stylist. 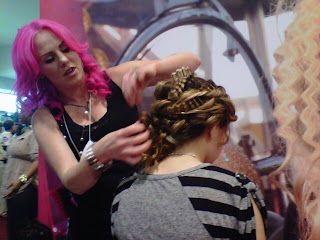 Her co-worker was a man of few words, but spoke through his appearance. He reminded me of a Johnny Depp kind of person. His 3 foot high, straight in the air, black Mohawk stayed in its perfect, upright position for the entire 2 days. He had tattoo art on the shaved sides of his head as well as other parts of his exposed body. It was captivating to watch him because he had this dramatic look, yet some sort of calm, gentleness was within him. He was pleasant and willing to take pictures with the countless people admiring his daring look. Of course, I was one of them. 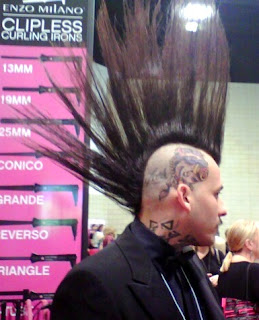 The 3rd attention grabbing person in this booth was a beautiful girl in lingerie wearing a tiny side hat, elbow length handless gloves and carrying a whip. Her makeup was dramatic and her look certainly got lots of attention. One may think her job took no effort, but she would tell a different story through her exhaustion, I am sure. She worked hard for her money during those 2 days as she paraded her look walking on STILTS the entire time. 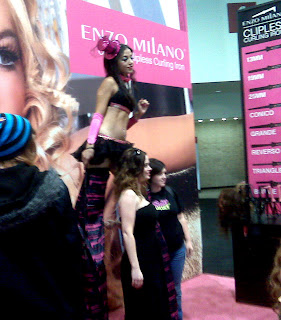 The stylist Nick Arrojo from “What Not to Wear” was an educator/platform artist, as well as Martin Parsons. I was in one of Nick’s classes years ago at a show in , so I knew he was great. He did numerous individual classes at this show, in addition to open demonstrations at his booth.
Martin’s class was my favorite one I attended. He did marvelous up-dos with no irons. The man had magic hands and the best personality. His work was nothing less than magazine worthy every time. 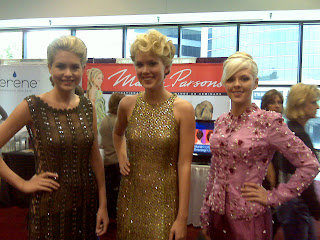 The more I got to know about him, the more impressive he became. He is a stylist, educator and author, from … but hasn’t been home in 5 months due to his full work schedule. He is living his life to the fullest and it glows from within him. Standing beside him for a picture was not what I expected because he looked like a regular sized man on stage, but he is actually 6’4”.

I was at the show with my long-time hair styling friend and we both thoroughly enjoyed the entire event in addition to our break from the real world. Our kids survived without mom and we enjoyed reliving our younger days, pre-babies. Once upon a time, we had no responsibilities as parents … now we have children who are driving cars. It’s too much too fast …