It was somewhere after 8pm and before 9pm on Thursday May 14, 2015 when time stood still. Whatever the clock said no longer mattered and had no meaning. I sat in a hospital room beside my lifelong friend who was laying in the bed, holding her hand as she was preparing to leave this earth. It would be my first time to be in the presence of someone leaving their physical body. I've never wanted so desperately to be somewhere and not be somewhere so badly.


For many years we have all disputed the threat of death taking Crystal. It has felt like two powerful forces; life and death, sparring and battling each other in an attempt to be the Alpha. Like two entities clashing in a circle. One going clockwise, the other counter clockwise. However, a week earlier it seemed they started to synchronize. They began spinning in the same direction, as one, and were no longer enemies, but one in the same. Death exists in life and life exists in death. And we must go through a laboring process for both.

It seems death is so similar to birth. There are usually (not always) physical signs alerting everyone the processes are happening. In birth, the mother’s tummy is large, her water breaks, cervix dilates, contractions begin and the urge to push becomes a force much like that of vomit. Everyone knows, ‘it’s time.’ When the human body is in the dying process the body retains fluid as organs shut down, the person withdraws, breathing changes, sometimes they see people who have passed and the skin takes on a different look known as mottling.
These indicators help clarify that certain things in life we can control and stop, while others are forces of nature and take on the similarities of an approaching storm. We must simply brace and endure the storm because attempting to stop it or rationalize with it will do no good. I wouldn't even say the storm would 'ignore or laugh at us' because we would be too irrelevant in comparison to its power and its mission.

Though I appreciate preparation and a heads up, seeing the above signs didn’t seem to help.

The rules of the game had now changed for Crystal.


Crystal and I had talked about her acceptance of her seemingly impending fate. She feared we would think she was giving up and she wanted to fight for us because she was fortunate enough to know her value to those who love her. She understood the upcoming pain every one of us were facing; especially her parents. That thought was more than she could take.


I assured her that no matter what, we would never think she gave up, just as we will never give up on her. Yet, when it is your time, it just is. Accepting death or rejecting it will not change the outcome any more than declaring a mother is not in labor.

When I entered her hospital room that night, the force of nature was ever-present. I went straight to her side, telling her it was me; then took her hand while stroking her beautiful, long hair and unusually ageless face with my other trembling hand. How I desperately wished our ritual of me crawling in bed beside her, brushing her hair, could continue. After my cry fest subsided, I began talking to her, hoping the rule that people can hear up until the end was true. I told her, “You know … you are part of me and I am part of you. When you leave, you will take a piece of me with you, and part of you will always stay with me … so come on, let’s get out of here.”


It reminded me of Taylor Swift’s song, “Ronan.” It is about a mom who said the same thing to her 4 year old son. She also said, “What if I really thought some miracle would see us through? What if the miracle was even getting one moment with you?”


When I was talking to Crystal’s sweet little girl as she was in the process of getting robbed of her innocence that no child should experience, I explained the reality of how a person takes part of us and we keep part of them … forever. If she needs her Mommy, she can be still in her mind and ask her Mom and God to bring her Mom’s energy to her. I hope she grasps the concept at a younger age than I did. Her Mommy can never and will never leave her. This concept may be a bit controversial to some, but it was Crystal's favorite part about me and she was the person who encouraged me to go deeper with it.


That night, Crystal’s family, myself and her other friends began the painful effort of encouraging her to be at peace with what was happening. It was surreal.


She peacefully slipped away so gracefully that we weren’t even sure she was really gone. Looking around the room, I could not help but see a profound beauty being a loving companion with the painful grief. What a gorgeous sight to see and feel someone being surrounded by love in such a way. Words cannot describe my simultaneous feeling of wanting to stay in that room like an anchor dropped in the water and wanting to run as fast as possible … as far away as possible.


We all were forced to let go of what we had to and hold on to what we could.

Truthfully, I have several “best friends,” and I remember how old I was when I met them … all of them except one. Crystal. We say we are pre-conception friends because our parents were friends when they were in school. Our parents remained friends, which meant we were born into our friendship. Over the years we have experienced life and death together, marriage and divorce, and everything in between. Our friendship is on a deeper level because no topic is off limits and that was certainly increased seven years ago …


Crystal was diagnosed with stage IV breast cancer in 2008 when we were 34. In 2014 it returned with a vengeance in her lungs, but she diminished its power by natural ways she had learned over the years. When I think of Crystal, I am so glad I told her all she taught me. The main thing was/is about life and death. The certainty of death exists for everyone. We can prepare for it or not, but it still will be a reality. After her initial diagnosis, I sat down and wrote my will, just like she did. I began talking to my girls in a matter of fact way, not a morbid/heavy way, about death being a part of life, and about being prepared. I also began to live more intentionally than I had ever done, never again to buy white sugar and having a more keen awareness of what I put in my body by ways of food and drink. And, to make sure I made lots of memories and always have fun no matter what. She taught me that when I got us detained in the airport and we missed our flight to New York. I apologized and she said, "That was my favorite part!" However, the most valuable statement she made that paralyzed the monster of fear within me was that she knows she will not miss anything God intends for her to see and experience … and that rule applies to all.


I once told her that I saw a reality. I am like everyone else and could die any minute, but the difference is no one has had a reason to stop and really value my life in the same way we had all done with her. As horrible as her death is, there is a hidden beauty she has over the majority of us because she was given the opportunity to be shown her value on this earth. Granted, I know I would be missed, but she has certainly witnessed hers on a far greater level.


Nine hours after Crystal’s time on earth ended, I went from holding her hand and saying a final goodbye, to boarding a plane and traveling to a happy celebration. It was a commitment I had made a couple of months prior. My fatigued brain could find no place of balance. I almost felt like someone who was hiding something as I congregated with all of the other passengers, feeling certain none of them had just held the hand of a best friend as she died. I looked like every other person, just experiencing a normal day and taking a plane ride. Being invisible would have been far more comfortable for me …


The plane ascended into the air above the clouds and I sat silently, staring out the window. Just as I told Crystal’s daughter and Crystal … there she was, on that plane with me. My fairy tale brain never fails me and I pray it never will. Though the trip had been booked for quite some time, I still felt like I was chasing behind her and trying to get closer to where she is now. Swept away into a magical place telling me I was looking through a window into a gorgeous, dreamlike sight of heaven. The clouds were stunning and whispered peaceful perfection. Some of them made a floor while others made beautiful picture designs that no artist could capture. In one picture I took, a cloud had formed itself into a shape of an angel’s wing. I took picture after picture and could not help but feel elation as I told myself and her, “Since I’m up here, today I choose to believe heaven is in the sky and angels reveal their wings in the shape of clouds. My thoughts declared to my Diamond in the sky named Crystal, ‘and here we are my sweet friend, on yet another journey together.” 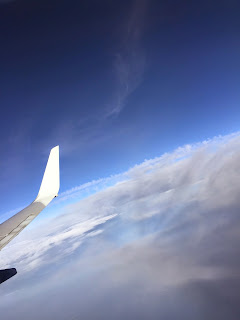 Forever friends with a Diamond