Singing and Dancing with a Cowbell in Chicago

Though healthy boundaries and proper speaking are indeed important . . . so is LIVING YOUR LIFE!!!
I thoroughly enjoyed a lesson life taught me last weekend. That is what this entry is about . . .
In short, I have a best friend named Eve. She and I have been friends for THREE DECADES. She says we are Yin and Yang, and just like salt goes with pepper . . . so do we.
My friend, Eve (Yin,) lives in . She is a dignified, professional counselor. (Her house is the setting for the “Chigger” tribute.) She is the friend who knows everything there is to know about me and still loves me. She accepts the good, bad and ugly as I do with her.
About a year and a half ago during a visit with Eve, we were talking about how we live our lives and what our dreams were.
Eve said, “You always do what you dream and take the chance.”
I asked, “Well, what is your dream?”
“You’ll laugh,” she said.
“Tell me! I want to know!”
Eve said, “I WANT TO SING ON STAGE AND BE A ROCK STAR!”
My eyes even smiled with me as I told her, “I think that sounds awesome! HA! I had no idea that was your dream!"
In January of this year I got a text from her.
It said: “I saw a flyer for an 80’s rock band. I auditioned and was accepted as a back up singer.”
I thought I was going to pee in my pants as I screamed a text back: “That is soooo great! YOU ARE LIVING YOUR DREAM!! Can I come there? I want to watch your dream come true right in front of my eyes!”
She responded: “I would love for you to come! And guess what? The band is called LTD . . . Living the Dream.”
I hopped on a plane and went to last weekend to watch a dream come true for my 4th grade best friend. We had a child-free weekend and took our time getting all dolled up. Sure, we were going to a small town dive bar . . . BUT WHO CARES! MY FRIEND IS A ROCK STAR!!!! WOOO HOOOO!!!!
I was not sure what to expect from our Friday night, nor did I really care. I only wanted to witness Eve’s dream come true, and that is exactly what I did.
Once we arrived, I noticed I did not blend in with the crowd . . . funny how that can happen. How is someone supposed to know what an unknown crowd will look like?!
I cannot count the times I heard, “Hi! . . . You must be the friend from . . .”
I ceased telling people I had bought my rhinestone jeans in . I still carried a “ look,” no matter where my garments were purchased.
I have not been in many small bars such as that one; but I liked it. Everyone was nice and there were no bar brawls like in the Roadhouse movie, so I was good. (Granted, if PATRICK SWAYZE was the cooler/bouncer, I wouldn’t mind a brawl. I love and miss that man . . .)
I met the band and the lady who orchestrates the extras. Eve had given me a little summary description of each person, so I kind of already knew who was who. I knew that there was one other girl singer. Eve said she has a “powerhouse voice” but needs to come out of her shell. (Her name will be Shelley.J)
The leader of the band is best described as an oyster. There is no indication what lies on the inside from the outside. He looks like a simple, reserved man by appearance; but, he is exploding with musical talent through his voice AND instrumental ability. He has a very kind disposition and I was pleased to know that my friend was working with someone like him. He liked my enthusiasm and introduced me with the band at the end of the show.
He said with a smiling laugh, “AND ON THE COWBELL . . . KASI!!”
By that time there were about five customers left and only one was responsive, so the cheering was minimal . . . but I still felt S-P-E-C-I-A-L!! 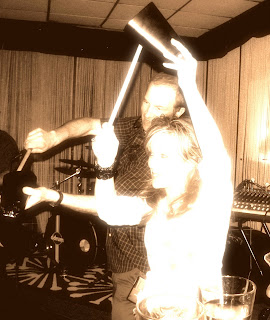 Now, about Betty . . .
I could not remember exactly what Eve said she had been through, I only remembered it was life threatening. Betty is probably near the age of our parents and is FULL of life. She interacts with the crowd, passing around cowbells and tambourines until the band closes the bar down at about one a.m. She is usually happily dancing along to the blasting music. I love her . . .
We had a fun night. I was sweaty, exhausted and had no voice by two a.m., but I was voted, “Best Fan EVER!!” Eve did so great and I did a great job cheering her on. We were 4th graders who had somehow now turned into 37yr old women singing 80’s music without a care in the world. Ahh, to have more of those nights . . .
The next morning, Eve was talking to Shelley and I spoke with her too. Shelley wanted to know what I thought. I told her how much I enjoyed the show and it was wonderful. I also informed her that I cannot hear if someone is off key, so I can’t assess the show very well musically . . . However, I could assess other things.
My overall message to her was to take inspiration from Betty.
I explained how I probably really shouldn’t be so energetic because I have no musical talent . . . and I kind of felt a little guilt.
Before Eve and I left, I had received two phone calls regarding two people back home who were faced with terrible things. I felt like I should not be celebrating when things were so bad for them. Eve reminded me, “Girl, you have served your time in that state. You deserve a fun night!”
When I got to the bar, I saw Betty. I didn’t remember exactly what had happened in her life, but I sure did watch her live it at that moment! I told Shelley, no one is guaranteed that everything will be in tact tomorrow. We must live life NOW.
Sing like it is your last song and live with no regrets. If our lives get interrupted by sickness, financial disaster, loss of our homes or even our lives . . . We will never wish we had sang quieter or danced less and we CERTAINLY won't care what "someone else thought of us" being joyful. If you have it in you, belt it out and enjoy yourself with no guilt or reservations.
For me, either way I looked at it; I was gonna dance, yell and ring my cowbell! I decided to celebrate my life and that I was in a happy moment. If my mind took me to a place of guilt, I chose to get up and dance WITH Betty FOR Betty. To celebrate HER life and what she had overcome to be on that dance floor.
I enjoyed watching my friend. A counselor who rocked, HIT ME WITH YOUR BEST SHOT, ANY WAY YOU WANT IT, GET THIS PARTY STARTED, DONTCHA WISH YOUR GIRLFRIEND WAS HOT LIKE ME, CHAIN OF FOOLS, DON’T STOP BELIEVIN and many other songs from our past.
It was AWESOME!
Shelley and all of us; we need to sing, dance and enjoy the moment when we have the opportunity . . . as powerfully as we can with no filters, reservations or guilt. Tomorrow holds no guarantees. I want to live like Betty.
Dancing with a cowbell when I can,
Kasi
Posted by Kasi M. Bryon at 4:42 PM